A rupestrian monastery partially ruined built under a large cave porch; it also houses a hermitage overlooking the church from a height of 12 meters. Although the site was mentioned by some of the 17th century travelers. No significant facts were recorded; it wasn’t until 1992 when the GERSL discovered a unique inscription executed on the wall of the apse in Ge’ez alphbet, an ancient liturgical Ethiopian language. This major discovery put an end a long controversial debate about the presence of Ethiopian monks in Mount Lebanon between 1470 – 1488 A.D. (Liban Souterrain 4 & 5). 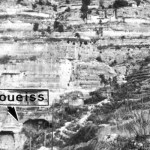