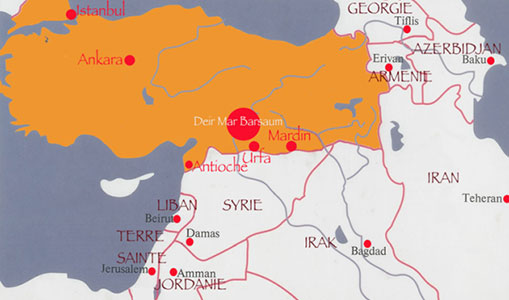 The field research aimed at rediscovering and describing the vestiges of the famous medieval monastery-fortress of Mar Barsauma, in kapli dag, Turkey.Two research missions were carried out between 2000 & 2004; as a result, the GERSL established a new geospatial database of the ruins, identifying and measuring the remaining surrounding walls and caves, studying the defensive system and finding the merest indication of water adduction systems.

The site is accessible following a long rocky ramp at the side of the cliff that has small notched stairs. It is the only possible way, and the cliff forms a natural defense line. The builder monks profited from the first heights of the Kapli Dag Mountain to establish natural defenses. The peak is a long ridge stretching towards the northeast; its average width is around fifty meters. The ruins are localized in a space starting from the crest line of the Kapli Dag in three distinct levels with a series of fortifications, a church and rock-cut caves.
Further invesitigations and collaboration with local academic institutions are forseen; The site is of considerable importance to world history [….] it is there where the three big chronicle of the syriac orthodox church were composed: Chronicle of Michael the Syrian, the anonymes chronicle of 1234 and the chronicle of Barhebreus […].